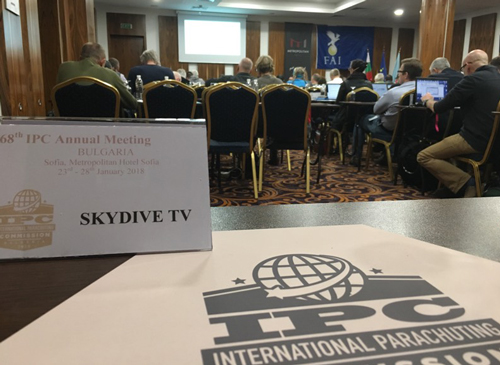 For the Second Time Skydive TV®  was unanimously voted as the Official Media Partner of IPC (FAI – International Parachute Commission) during the latest IPC Plenary meeting held in Sofia, Bulgaria in January, 2018.

Skydive TV®  was invited by the (previous) IPC president Dr Rainer ‘Exi’ Hoenle to present their work from the last few years and mostly to report the coverage of the First Category IPC events since 2016, when Skydive TV® was voted for Media Partner of IPC during the Plenary meeting in Frankfurt.

After short discussion all IPC Delegates at the plenary showed their strong support to Skydive TV’s work and voted for Skydive TV®  to continue as an Official Media Partner!

Read the notes from the meeting and discussions here

Skydive TV® would like to extend a special Thanks to all of the International delegates who voted and supported this Partnership!  Thank you!  Our team will work very hard to prove that this decision was the right one!

See all the delegates here

We look forward to creating one of a kind video programs promoting the competitions, the competitors, the teams, the industry, the governing bodies, the sponsors, The Dropzone hosts and lifestyle of the most unique and adventurous sport on the planet – Skydiving!

Skydive TV® will present all the locations, won the bids for the upcoming World Cup and Championships in 2018, 2019 and 2020.